5/28/2016: another cool but blue sky and high puffy cloud morning. A few of Wyatt’s men were in pursuit so we had to get out of Dodge pronto!! . I can’t hardly describe how straight the Rt 56 highway was today. It seems each town was marking its presence with towering granaries that loomed forever in the distance. Sometimes we guessed (often incorrectly) that they were 5-6 miles away when in fact they were twice that or better. We were heading to Great Bend- a classic 1880’s in origin plains town where early settlers lived in sod houses unable to grow crops due to the constant stampeding of millions of buffalo. The Pawnee Indians were the local, mostly friendly tribes people who lived here,  but just east and south were the Comanche’s – read “Empire of the summer moon” by SC Gwynne ​

​﻿ if you want a vivid picture of their fierce defense of the lands. About 70 miles into today’s ride we left the main road and headed 1/2 mi West to Pawnee Rock Historic Park an historic site which was a high point sitting several 100 ft above the plains and a place where for centuries Indians could look for threats from other tribes or watch the movement of the Buffaloes as they planned their hunts. Slowly the settlers, railroad and cattle changed the area but a rich history is here. In an effort to end Comanche attacks by cutting off their food sources,  in the late 1880’s the military hired post Civil War veterans to hunt and kill the buffalo– more like slaughter them by the millions, leaving their Carcasses to rot and litter the prairies. Not a pretty picture . Great Bend is located at the site where the Arkansas River bends East and southeast– practical name, just like most things from what I see being done here in Kansas. Thes are solid, friendly no nonsense  folk! Today’s final vision for me is the endless waves of blowing wheat-miles of different shades of green and a vision of what 3-4 ft high prairie grass and Buffaloes must have looked like in contrast– a 150 years ago as well- both so beautiful!! 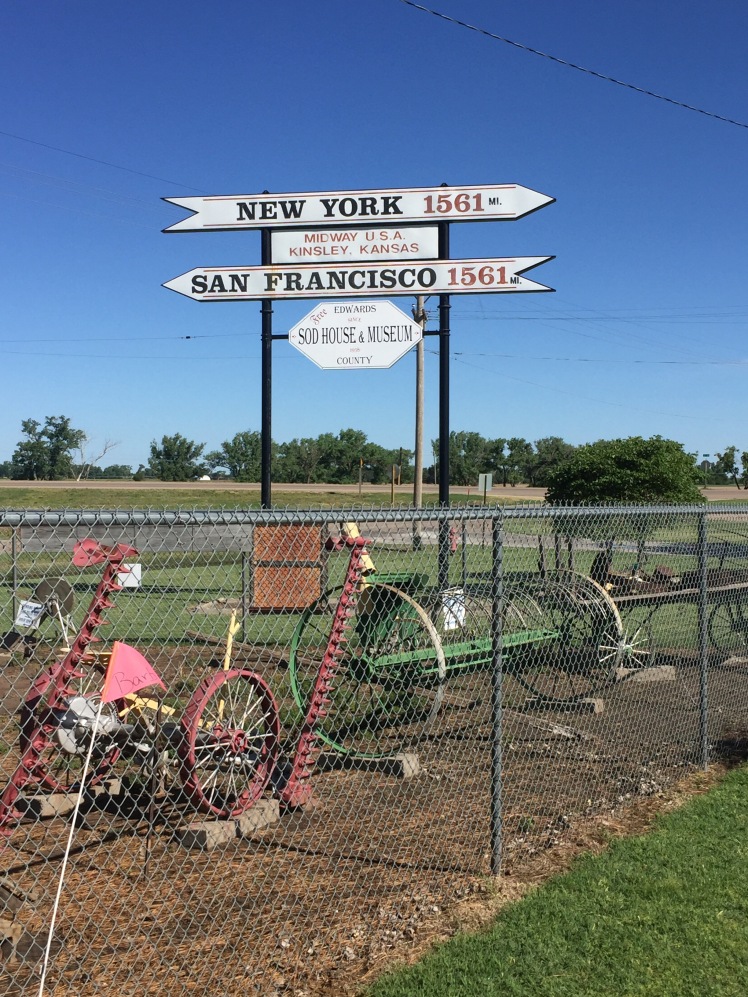