June 6, 2016: Today was all about getting the ride done. We rode 106 miles and that’s a bunch of miles- period. We got lucky, again, with winds at 20 + mph mostly behind us,  but when we changed direction and it hit us in the face–holy crap, did it made us all appreciate how lucky we’ve had it! The air temperature was 94 degrees – both factors made it essential that we drank plenty, took in electrolyte pills or liquids and ate enough calories to withstand it. Sabine needed a short lift to the hotel due to symptoms of dehydration and all of us were extremely cautious! Took only a few photos – the riding was that intense and focused. Check out the video of us crossing over the Illinois River- Kevin shot it just after he nearly had a major spill as we approach it. Steady hand he had after such an adrenaline scare! The bridge will soon be abandoned for a new edition, it’s narrow and we had our van escort us over– but it’s also a classic!!​

​ Corn is growing everywhere! BTW-How do you like the “Team Godfather” photo!! Kevin gave Howard, our cycling extraordinaire from England, honorary status and even as I write, we’re carefully screening for more. The team should be assembled in time for this years Tour de France or the next big Bike For Mike ride!! On a personal note- I just found out my friend of over 40 years – Evan Stone- passed away Saturday 6/4 following a 2 1/2 year battle with lung cancer. He wasn’t a smoker either. Evan was without one bit of exaggeration one of the nicest, most even tempered, intelligent and humorous men I have ever met. To his wife Jill – You have wonderful friends so lean on them, his passing is an enormous loss and my thoughts and prayers are with you , Liz and Adam. 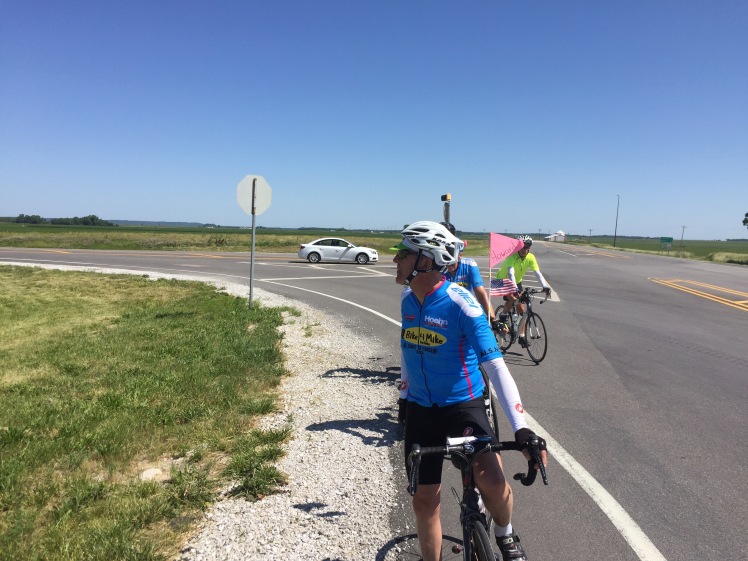